Start a Wiki
"On The 6" is the debut album by Jennifer Lopez which was released on June 1, 1999 on Epic\Work Records.

"On the 6" contains pop, R&B, latin pop and dance music and had many producers such as Rodney "Darkchild" Jerkins, Tommy Motolla, Diddy (formerly known as Puff Daddy), Cory Rooney, and Ric Wake.

After filming the movie "Selena," Jennifer became inspired to launch a music career. She cut a demo in Spanish that included the song "Vivir Sin Ti." Jennifer's manager sent the song to Sony Music Entertainment's Work Group who showed an interest in signing Jennifer.

The head of the label, Tommy Mottola suggested that Jennifer sing in English instead. She complied and began recording her debut album. During production of the album, Jennifer was aware of the fact that she received a record contract on the premise of her looks and already having an established name in the entertainment industry & wanted to prove that she had musical talent.

Prior to the debut of Jennifer's music career, critics wondered why she would risk launching a music career and noted that if "the album was a flop, not only would it embarrass Lopez, but it might even damage her career."

The album title is a reference to the 6 subway line in New York City which Jennifer used to commute to work in Manhattan from her residence in The Bronx during the early years of her career. According to Jennifer:

Jennifer said that she hoped that "On the 6" would appeal to people like her, saying:

"English is my first language. I grew up here. I was born here, I didn't have a career in Spanish first. I think it [the album] appeals definitely to my generation of people, we grew up in America but had Latin parents or parents of different ethnicity."

Jennifer wanted the album to reflect of these sides of her and regarded Hispanic people as her "core audience." For the album, Jennifer and Tommy Motolla met with multiple producers, but when record producer/songwriter Cory Rooney met Jennifer, they "immediately hit off" after speaking.

Cory then played the song "Talk About Us" for them on the piano while singing with Jennifer and Tommy becoming very receptive towards it. The next day, Jennifer recorded the song and began working closely with Cory for the rest of the album.

Grammy Award-winning singer/vocal producer Betty Wright worked closely with Jennifer on the album and provided her with "plenty of inspiration" and Jennifer stated that Betty had an "amazing spirit" & recalled:

"She was in [the studio] with me, day in and day out, helping me. I'm a young singer, you know? A young studio singer. I may have sang all my life, and I may have sang on stage and stuff like that, but it's different to record in the studio. And you need somebody who really can guide you through that."

"On the 6" debuted at #8 on the Billboard 200 chart, with first week sales of 112,000 copies and remained in the Top 20 of the Billboard 200 for 11 weeks. It sold 7 million copies worldwide and earned Jennifer her first #1 hit song with the single, "If You Had My Love" and the #1 dance hit, "Waiting for Tonight." The album was certified Platinum in the United States, Argentina, Canada, Europe, the Netherlands, New Zealand, Poland, and the United Kingdom. It was also certified Gold in Australia, Austria, Finland, France, Germany, and Switzerland. 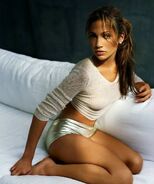 Add a photo to this gallery
Retrieved from "https://jenniferlopez.fandom.com/wiki/On_the_6?oldid=4727"
Community content is available under CC-BY-SA unless otherwise noted.