Start a Wiki
"Love?" is Jennifer Lopez's 7th studio album which was released on April 28, 2011 on Island Def Jam Records.

"Love?" is Jennifer's most personal album to date which takes inspiration from the birth of her twin children, Max and Emme. Jennifer refers the album as containing her best vocals to date.

Jennifer had been working on new music while pregnant with her twins. In February of 2009, the song, "Hooked on You" was leaked to the Internet. Jennifer addressed the leak in May 2009. Songwriter Wynter Gordon addressed another song leaked that she wrote called "What is Love?" In June 2009, Jennifer told MTV's Larry Carol that she was keen to finish the album and announced a potential release date for her new album by the end of 2009.

According to AOL's music entertainment site, PopEater, it was reported that "Love?" was shelved by Epic Records and they never committed to releasing the album, even though it hasn't been confirmed by either Jennifer, Epic Records or Island Def Jam Music Group. In February of 2011, Jennifer told BBC that the album was nearly done and she had recorded 20 songs from 2009 to 2011 that were being considered for the album, but finding it hard to edit them.

While filming her movie, "The Backup Plan" in June of 2009, Jennifer revealed to MTV's Larry Carol that she had been working on her 7th album during her pregnancy, but it wasn't until her twins were born that Jennifer became focused on the album.

The first song written was "(What is) Love?" (which was leaked in May of that same year) by Wynter Gordon and was produced by Emile Dernst II or "D'Mile." Songwriter\record producer, Jean Bapiste Kourame wrote a part 2 to "(What is) Love?" but it never made onto the album. "What is Love?" was released on the soundtrack to "The Backup Plan" movie which was released in 2010.

Antea and Anesha Burchett had also co-written "Hooked on You" along with Muhammed Kateeb and Otis Greyson. They also co-wrote the song, "Love and War" along with Danja, who wrote the song, "Keeper," but both songs did not make the cut on the album. Another song, "Beautiful," a guitar-driven ballad was recorded for the album, but didn't make the cut.

Jennifer also worked with Norwegian music producers, StarGate on the songs: "Story of My Life" and "I'm Into You." "Story of My Life" didn't make the cut, but "I'm Into You" did. Other producers included Christopher "Tricky" Stewart and The-Dream, who produced the song, "Louboutins" which topped the dance charts in the US, but didn't make onto the album or receive any airplay whatosever.

With Tricky and The-Dream, Jennifer recorded the song, "Run the World" which originally featured The-Dream and rapper Rick Ross, but were removed from the final track listing. Another song produced by The-Dream and Tricky was "Good Hit" that was initially lined up as a "buzz" single.

Jennifer also worked on the album with Moroccan music producer RedOne and recorded "On the Floor" and the songs "Invading My Mind" & "Hypnotico" which were also co-written and produced by Lady Gaga. "Hypnotico" was originally recorded by Jamaican singer Tami Chynn for her shelved sophomore album, "Prima Donna." Jennifer also worked with producer Troy "Radio" Johnson on the album.

Jennifer stated to MTV News that the album would have a very tight and focused concept, but she refused to reveal the album title's name or concept, saying it was personal to her. In October of 2009, Jennifer announced the album would be called "Love?" because according to her, love was something that still confused her and that's why "Love" has a question mark at the end of the word.

"Love?" combines pop, R&B, and hip-hop songs for a mixture of club-ready singles along with slower mid-tempo songs. The album cover was released on Barbara Walters' television special, "10 Most Fascinating People of 2010" which aired on December 11, 2010.

In July of 2009, Jennifer's spokesperson told "People Magazine" that Jennifer wasn't replacing Paula Abdul on "American Idol" for the show's 8th season because she would be busy promoting her film, "The Backup Plan" along with her new album. Both projects were slated for a release in January 2010, despite Jennifer previously stating the album and movie would be released by the end of 2009.

During an interview with "KTU Mornings," Jennifer revealed that the movie and album would be pushed back to April 2010. "Rap-Up Magazine" later confirmed that the movie and album would be released together in cross-promotion of each other, but it appeared unlikely when Jennifer said backstage at the 52nd Grammy Awards: "I'm working on my album that will be out... hopefully this year, we'll see if I get it done... You know how it is, you go in your there non-stop, you leave it alone for a minute and you come back, you're like, okay, this is what I need."

On February 22, 2010, Jennifer left Epic Records, leaving the fate of her new album unknown. Jennifer's manager, Benny Medina stated: "Jennifer had a wonderful relationship with the Sony Music Group, and they have shared many successes together, but the time was right to make a change that best serves the direction of her career as an actress and recording artist, she is grateful and appreciative to everyone at Sony for all that they accomplished together."

During that same day, Jennifer's representative confirmed the news to "Entertainment Weekly" reporting that Jennifer would be negotiating a deal with other record labels. Jennifer confirmed the split from her label and announced she found a new label and her album would be released in the summer of 2010.

"Billboard" magazine later stated that Jennifer signed to Island Def Jam Records and her album would be released in the summer of 2011. According to "Rap-Up Magazine," the album's release date was set for March 29, 2011, but later pushed back to April 19, 2011. On March 13, 2011, Jennifer confirmed that the album would be released in the United States on May 3, 2011.

The promotional campaign for the "Love?" album started in 2009 with the single "Fresh Out the Oven" featuring rapper Pitbull and promoted to dance clubs in the United States which topped the dance charts. In November of 2009, Jennifer premiered the album's lead single "Louboutins" at the 2009 "American Music Awards". The performance gained notoriety for an unchoreographed fall in the middle of the dance routine. Jennifer was praised for her swift recovery and continuation of the performance.

Jennifer reprised her performance on the "Ellen DeGeneres Show" on December 3, 2009 where she laughed and joked about the incident. She was also booked to perform on the 6th season finale of "So You Think You Can Dance" on December 16, 2009. The performance took on a holiday theme and was choreographed by the show's team.

Jennifer's final performance of the year came on December 31, 2009 where Lopez performed "Louboutins" along with a medley of previous hit songs: "Waiting for Tonight" / "Let's Get Loud" at Dick Clark's "New Year's Rockin' Eve with Ryan Seacrest." Jennifer's choice of outfit, a shimmering skin-tight cat-suit, received attention from the media with the "NY Daily News" praising her for her "flawless physique."

On January 18, 2010, on the talk show "Lopez Tonight", Jennifer appeared in place of George Lopez and opened the show with a 10-minute comedy set. George Lopez appeared after she finished to continue with the show and announced that Jennifer would be back in several weeks with a live band to perform.

On February 19, 2010, Jennifer performed at the 60th annual "Sanremo Music Festival" in Sanremo, Italy. She performed a medley of her chart-topping hits, as well as "(What is) Love?", introducing it as the lead single from the soundtrack of her then-upcoming movie, "The Back-up Plan."

On February 27, 2010, Lopez performed and hosted an episode of Saturday Night Live. She performed two new songs: "Pieces" and "Starting Over" although it was later confirmed that the first song Lopez performed was actually called "Until It Beats No More" and not "Pieces" as reported.

On January 16, 2011, a trailer for a new promotional single, "Good Hit", was released. In the video, Jennifer assumes the role of a teacher to lead a classroom of beauty school students. It was directed by Alex Moors back in October 2010, back to back with another song called "Take Care." It is the album's second promotional single after "Fresh Out the Oven" with Pitbull.

The debut of the album's first official single, "On the Floor" featuring Pitbull, was timed to coincide with the premiere of Jennifer's "L'Oréal" hair commercial during the 68th "Golden Globe Awards" ceremony and her debut as a full-time judge on the 10th season of "American Idol."

Several more promotional singles preceded the album's release, all were exclusively released through the iTunes Store. On March 22, 2011, the Spanish version of "On the Floor" titled "Ven a Bailar", was released followed by "I'm Into You" on April 2nd, "Papi" on April 17th, and "(What Is) Love?" on April 23, 2011.

Elsewhere, Love? performed decently. The album debuted at number 11 on the Australian ARIA Albums Chart, becoming her highest debut since 2005's "Rebirth" which peaked at number 10.

Later, the album jumped to number 9, becoming her best album on the Australian charts since 2001's "J.Lo."

In New Zealand, the album debuted at number 19, becoming her best debut since her 2002's remix compilation "J to tha L–O! The Remixes."

In Switzerland, the album peaked at number 1, becoming her fourth album to do so.

It was later certified gold for selling more than 15,000 copies.

In Spain, the album peaked at number 3, becoming her best since 2007's "Como Ama una Mujer."

In France, the album debuted and peaked at number 7, becoming her best effort on the French charts since "Rebirth" remaining for 24 weeks on the charts, her longest since "This Is Me... Then."

In the United Kingdom, "Love?" debuted and peaked at number 6, her best album on the UK charts since "J to tha L–O!"

In July of 2013, the album was certified gold in the country for completing shipments of 100,000 units.

It holds an average score of 46 on Allmusic.com and Allmusic editor Stephen Thomas Erlewine gave a mixed review on the album, stating: "Lopez was never, ever about singing" and refered to the album as "high-sheen wallpaper, so flimsy that it peels away immediately after application."

Rolling Stone critic, Jody Rosen's review of the album was: "Love? arrives with shiny production credits, but it's undone by J.Lo's slight voice and slighter personality."

The Los Angeles Times gave a critical review of "Love?" refering the album as a "limp, personality-free dance-pop collection with plenty of A-list collaborations (Tricky Stewart, RedOne, Lady Gaga) but none of the lightweight charm she once brought in hits like “Waiting for Tonight” and “Jenny from the Block."

But not all reviews were mixed or negative. Ian Drew of "US Magazine" stated: "All in all, when it comes to her day job, J. Lo is solidly still in business" and praised Jennifer for returning to her "dance-diva-from-the-block roots."

"Digital Spy" gave a positive review of the album, stating: "As a comeback album, Love? does the job perfectly - hauling an almost-forgotten Lopez back into chart relevance with a collection of calculated, safe and bang-on-trend tunes that were constructed for radio and clubs alike." 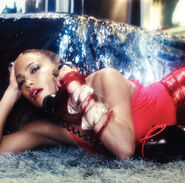 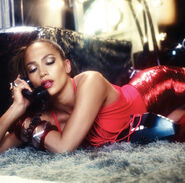 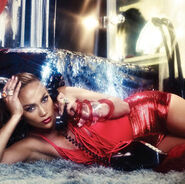 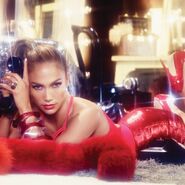 Add a photo to this gallery
Retrieved from "https://jenniferlopez.fandom.com/wiki/Love%3F?oldid=5721"
Community content is available under CC-BY-SA unless otherwise noted.