"J.Lo" is Jennifer's second album released on January 23, 2001 on Epic Records. The album has a more urban vibe than her debut album and focuses mainly on part R&B, part pop, and part Latin music.

The re-released album also came with a "Parental Advisory" label warning although the standard album version did not feature one despite the uses of strong language and sexual content in a few of the songs (specificially in the songs "I'm Real," "Play," and "Come Over.") along with the use of racial slurs and strong language in the "I'm Real" Murder Remix bonus track.

In April of 2000, MTV News reported that Jennifer (who had completed filming a romantic-comedy film entitled "The Wedding Planner") would begin recording her second album after completing filming another film entitled "Angel Eyes."

In August of that same year, Jennifer told LaunchCast that the album would be called "My Passionate Journey" and stated that she would hopefully have the album out by October. It was also reported that Jennifer's then-boyfriend Sean Combs (who co-produced some of the tracks on Jennifer's debut album "On the 6") would be contributing to the album and Rodney "Darkchild" Jerkins (who produced Jennifer's song "If You Had My Love") would also be working on the album as well.

In August of 2000, Jennifer reported that the album was set to be released in November with the first single scheduled to be released in late September. Jennifer later decided to rename the album from "The Passionate Journey" to "J.Lo" which was a nickname that her fans called her on the streets since the start of her career.

Jennifer titled the album "J.Lo" as a homage to her fans. According to Jennifer:

"My fans call me J.Lo. Giving the album this title is my way of telling them that this is for them in appreciation of their support."

Several artists would later follow with this trend such as Janet Jackson for her 2004 album "Damita Jo" and Mariah Carey with her 2005 album "The Emancipation of Mimi." Prior to the album's release, Jennifer knew it was important to "stay fresh" wanting to innovate the music industry.

Jennifer made the decision to tweak her public image, dying her hair and changing her stage name to "J.Lo." She had more creative control over "J.Lo" than on her debut album, explaining that "I really felt like this time it was even more mine."

During the release of the album, Jennifer began to transition into a sex symbol. Previously, she had been vocal in living her life while also acknowledging her responsiblity as a role model. She stated:

"I mean, I feel like you can't take on the responsibility of the world, you know? I think it's destructive [...] You start thinking, Oh God, I have to do this or do that. You have to live your life. I don't do drugs, I don't drink or smoke or do anything like that. So, those are the type of things that people like [in] role models: 'Oh, you can't be human.' You are human."

The album's lead single, "Love Don't Cost a Thing", was included on the soundtrack of Jennifer's 2001 film, "The Wedding Planner." The song topped the charts in the United Kingdom, Canada and New Zealand, as well as reaching the top ten in many other countries.

"Play" was released as the second single. It was less successful than "Love Don't Cost a Thing", having managed a peak position of #18 on the Billboard Hot 100. The song was well-received in the in the United Kingdom, Canada, New Zealand, Sweden and Switzerland. The third single released, "Ain't It Funny", failed to chart in the United States although reached the top ten in the UK.

"I'm Real", the album's final commercial single released in the United States, peaked at number one on the Billboard Hot 100, as well as reaching the top ten in Australia, Canada and the United Kingdom.

"J.Lo" received generally mixed reviews upon its release. Allmusic's Stephen Thomas Erlewine stated about the album: "Essentially, this is the same album as "On the 6," only a little longer with a little less focus and not as many memorable songs. This lack of winning singles becomes a drag, since at over an hour, the record meanders much longer than it should. [...] meander isn't really the right word, because the album sets its tone from the start."

Entertainment Weekly gave "J.Lo" a "C" minus and commented on Jennifer's vocals stating: "There's no way to know if Jennifer Lopez's voice is mechanically altered or not, but on the recorded evidence of her sophomore album, J.Lo, her singing seems to be in key" and also said: "Our gal consistently aims for the lowest common denominator, shamelessly spouting disco era banalities ... on several dance tracks, and cooing about L U V and S E X everywhere else." Christian Ward of "NME" gave the album negative reviews, describing Jennifer to "a market between, like, Janet Jackson and Gloria Estefan."

Despite the reviews, "J.Lo" debuted at #1 on the Billboard 200 and Billboard's Top R&B\Hip-Hop Albums chart which grossed over 272,000 copies sold during in its opening week. During that same week, Jennifer's movie, "The Wedding Planner" topped the box office, making Jennifer the first singer\actress to have a #1 album and film in the same week. 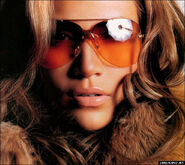 Add a photo to this gallery
Retrieved from "https://jenniferlopez.fandom.com/wiki/J.Lo?oldid=4588"
Community content is available under CC-BY-SA unless otherwise noted.