The album contains a remake of Jennifer's song "(Can't Believe) This is Me" from her previous album, "Rebirth" in 2005 with the Spanish-language version, "Porque Te Marchas (Why Are You Leaving)."

The bonus track from "Como ama una Mujer" was a remake of the song, "Sway" which was originally recorded for the 2004 soundtrack of Jennifer's movie, "Shall We Dance," but was recorded instead by the Pussycat Dolls.

Jennifer was the executive producer of a mini television series on Univisión in 2007 named after and based on the album. At the end of each episode, Jennifer performed one song from the album.

In 2004, plans for Jennifer to release a Spanish-language album materialized in 2004 when her then-husband Marc Anthony was finishing up production of his 2004 "Amar Sin Mentiras" album with Estéfano and Julio Reyes.

Jennifer went into the recording studio with them to record a duet called "Escapémonos" and enjoyed working on the song so much, she wanted to record a full-length Spanish album. According to Jennifer, she always pictures her music career to be in Spanish, stating:

"My life took a different turn, which was great for me. But my heart was always kind of on the Spanish side."

According to Estéfano, the album will "prove critics wrong" from its "big songs that require a voice"; referring to the critics about Lopez having a "limited" vocal tone. After working on the album, Jennifer said that she matured as a singer, stating:

"Marc gave me confidence in the studio as well. When someone believes in you so much, you don't want to let them down. And it's also the material. I think this material lent itself to my voice. And it actually made me approach my new English album in a different way. I have a different standard now." 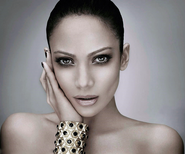 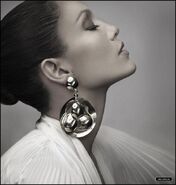 Add a photo to this gallery
Retrieved from "https://jenniferlopez.fandom.com/wiki/Como_ama_una_Mujer?oldid=5605"
Community content is available under CC-BY-SA unless otherwise noted.