Brave is Jennifer's 6th studio album which was released on October 4, 2007 on Epic Records.

It was Jennifer's last album released on the Epic Records label and her least commercially successful album to date. The album also returned Jennifer to pop, R&B, and hip-hop music after her 2005 album, "Rebirth."

In an "MTV News" interview while Jennifer was on the set of her music video for her single, "Me Haces Falta," Jennifer promised her fans that there would be "dancable music" on her next album. She stated that the album would be: "dance, funk, R&B, hip-hop, all that stuff, all mixed up together to make some great pop music" and described the album as: "a little Jamiroquai, a little Sade. It's real feel-good music."

Jennifer worked with music producers Ryan Tedder, J.R. Rotem, Bloodshy & Avant, Midi Mafia, The Clutch, and many more. The songs "Do It Well" and "Hold It, Don't Drop" were released as singles. The title song, "Brave" was supposed to be released as the 3rd single and it was revealed that a music video for the song was complete, but it was never released as a single, but it managed to top the charts in South Korea.

The song, "Mile in These Shoes" peaked at #16 in Finland and was believe to be the 4th single from the album, but never released after promotion for "Brave" was cancelled.

"Brave" received mixed reviews. Billboard's review of the album stated: "The album is another market-smart collection of radio fodder, rather than Lopez's artistic breakout. That said, no one does classy pop quite like she does." Dotmusic gave a positive review stating: "Brave is actually one of her strongest albums to date."

Allmusic's review of "Brave" stated: "It's nothing more than modest music for mellow good times, but it's lively enough to be fleeting fun, with enough good tunes for a mild party, preferably one that's held at home." Rolling Stone stated: "J.Lo has turned away from the slick, minimalist future funk currently ruling the pop zeitgeist for chintzy production that screams 1990."

Entertainment Weekly gave a negative review of the album stating: "Expensive beats and uplifting material are offset by listless vocals." They also placed "Brave" at #5 on their list of "Worst Albums of 2007." Vibe Magazine's review was similar to Entertainment Weekly's review stating that: "Brave on the whole is almost unapologetically poor isn't surprising--Jenny's never made a viable "Album of the Year," but never before has the fly-girl-cum-cover girl been so listless." 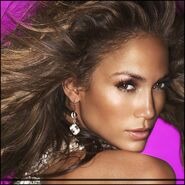 Add a photo to this gallery
Retrieved from "https://jenniferlopez.fandom.com/wiki/Brave?oldid=5103"
Community content is available under CC-BY-SA unless otherwise noted.