The album is the follow-up to her seventh studio album "Love?" which spawned one of her biggest hits of her career "On the Floor" and to her first greatest hits compilation album "Dance Again... the Hits."

It was developed after the release of "Love?" with Jennifer writing a "collection of songs" with some being on the compilation and other being kept for a new album.

After the Dance Again World Tour, she started writing more songs for the new album.

In 2011, Jennifer released her long-awaited seventh studio album, "Love?" which was met with mixed reception from critics and moderate impact on the charts.

However, the album spawned Jennifer's most successful single to date "On the Floor" which topped more than twenty national single charts.

In 2012, while releasing a single called "Dance Again" in March, she stated:

"I’m working on a collection of songs right now, and I don’t know what I’m going to do with them. We don't know whether it’s going to be a full album or 'Greatest Hits'."

In an interview for MTV News, Moroccan-Swedish producer RedOne, who previously produced her hits "On the Floor" and "Dance Again" announced that he was the executive producer of her album, stating:

While celebrating the new year, Jennifer told her fans on Twitter that she would be unveiling her eight studio album in 2013.

While in the early stages, the executive producer of the album RedOne announced that:

"You're going to have all the sides, kind of urban/hip-hop and the commercial, like the way she did with Ja Rule. It's everything you love about her [including] the dance, the rhythmic, the Latin."

In 2013, after performing her hit "Jenny from the Block" with Taylor Swift during Swift's "Red Tour", US Magazine reported that Swift would appear on Jennifer's upcoming album.

However, Swift told E! News that any reports of an upcoming duet were false.

On March 22, 2013, Jennifer posted an image of herself, singer Chris Brown and long-time producer Cory Rooney in a recording studio, sparking a rumour that both artists were collaborating.

Later, she confirmed the collaboration, saying, "We were in the studio writing songs and getting that whole 'Jenny from the Block' flavour back on. We actually worked on a bunch of ideas and we talked about doing a duet together for his album."

Jennifer worked again with Pitbull and RedOne on a track called "Live It Up."

"Worked with Jenny from the block yesterday. What a charming, sweet, funny person. "And she can really SING! Anyhoo. Super fun."

In September of 2013, singer Robin Thicke was pictured in the recording studio together by Jennifer's sister Lynda, sparking speculation of a possible collaboration.

"It’s funny. I actually played him a couple of different songs so he could see what I was doing and he was really excited about it," Jennifer said of their collaboration.

"He picked the song he wanted to do. We did a song together called 'Love Line' [produced] by Da Internz. It was actually his idea to get Wiz Khalifa on it," Jennifer continued.

On April 13, 2014, she confirmed that Thicke will feature on the album, also confirming:

"French Montana, Tyga, Big Sean, Wiz Khalifa and Maxwell. The track I did with Future, I don't know if it's going to make the album."

During an interview for Hot 104.7, Jennifer also revealed that she also worked with pop producer Max Martin.

"This album is tough. There’s strength, but also humor. It’s about being smarter about love—and not taking yourself so seriously."

"I’d been working on it since last February [2013] for over a year now. My goal was to just be as honest as I could. You know, I’d gone through a lot in my life right at that point when I went on tour. I’d been through a divorce. A lot of things had happened. I really felt like it was a turning point in my life. I’d learned a lot about myself. I grew out my perspective on a lot of things — changes, including love — and there was just a lot that I had to say."

"My topic is love. It always has been. It’s my motivation. It’s what I think about. That’s who I am at the essence. But what I thought about love for my first nine albums is very different from what I think about it now after everything I’ve been through."

While being asked about what was the most personal song on the album, Lopez answered to Pop Crush that, "'First Love', 'Emotions' and 'Let It Be Me’ are all very personal," also confirming that the tracks are present on the album.

On April 12, 2014, during a listening party in Jennifer's backyard, critics listened to some of the tracks present on the album.

According to R. Dub of Slow Jams, "My First Love" and the catchy "Big Booty" are on the album, however, Dub wrote that the last track "Emotions" had "stellar production but it was J-Lo’s vocals combined with an absolutely incredible set of lyrics that had me mesmerized for the entire three and a half minutes."

On March 29, 2014, Jennifer also performed a track called "Never Satisfied" during a performance at the 2014 Dubai World Cup.

The album was scheduled to be released in 2013, as announced by Jennifer herself.

Later the album was tentatively scheduled for November, with Jennifer adding:

"I think we're going to release this first [the single 'Live It Up'] and then a few singles and then we'll decide when to put the album out. The way the industry is going... I'm more a believer of letting it gain momentum. Let there be demand for the album by putting out some great music first."

During an interview with Hot 104.7, Jennifer revealed that the album will be released on June 17, 2014, explaining:

"We're in the final stages of putting it together," she told host Ryan Deelon after revealing the date. "I think I have to turn it in like next week."

When asked about the title for the record, Jennifer said that she would wait "until the last minute" to decide.

The promotional campaign for the album started when Jennifer released the song "Live It Up" on May 8, 2013, as the lead single of the new project.

The song is produced by RedOne and features rapper Pitbull, being the third time they worked together (the first being "On the Floor" (2011) and the last being "Dance Again" (2012)).

The song is a dance-pop track, and lyrically, it has Jennifer singing inspirational phrases about doing anything we want, living it up, not stopping and going.

The song failed to repeat the success of the previous tracks in the United States, but reached the top-twenty in Australia, Canada, Ireland, Spain and the United Kingdom.

Later, on December 28, 2013, she was seen filming a new video for a track called "Same Girl" on her hometown in the Castle Hill neighbourhood of The Bronx. The song was co-produced by Chris Brown and Cory Rooney.

To further promote the album, Jennifer released another track called "Girls" on January 23, 2014 through her SoundCloud.

The track is produced by DJ Mustard and is a hip-hop, laid-back track.

The single "Girls" was released on January 27, 2014 on iTunes and Amazon.com. Both songs are R&B and hip-hop-infused tracks, having a more urban vibe.

In March of 2014, Jennifer announced the song "I Luh Ya Papi" featuring rapper French Montana as the album's official first single.

The hip-hop and synthpop song was released on March 11, 2014, however, the track performed poorly on the charts, only reaching number 77 on the US Billboard Hot 100 and number 78 on the Canadian Hot 100.

In the United States, "A.K.A." debuted at number 8 on the Billboard 200 with 33,000 copies sold in its first week, becoming the lowest sales debut of any of her studio albums.

In the United Kingdom, the album only reached number 41, becoming the lowest-charting album of her career to date.

It also reached the low-regions of the Netherlands where it debuted at number 39, becoming her lowest-charting album there.

In Switzerland, the album experienced a top-twenty debut, at number 15 although it was her only studio album to not debut inside the top-ten.

Regarding the lackluster sales of the album, Jason Lipshutz of Billboard commented on the fact that the album proved that Jennifer was "trapped in a different era."

He claimed that "the 33,000-copy sales debut of 'A.K.A.' represents a crossroads moment for a superstar who's about to turn 45. Lopez is right when she says that she doesn't have anything more to prove, but her sound needs to develop alongside the rest of her professional life."

However, Lipshutz did note that the abundance of powerful ballads on the album (most notably the track "Let It Be Me") could be Jennifer saving grace for her flailing recording career, stating:

"A song like 'Let It Be Me' on "A.K.A." proves that, if Lopez finds the right production partners, she can serve up slower material that can measure up to the best balladeers' work. Throughout her career, Lopez's greatest strengths have been dancing and churning out dance music. However, the ballads on 'A.K.A.' hint at a sweeping musical direction that Lopez has typically relegated to the back of her albums, as a supplement to her uptempo spectacles. Perhaps it's time to move it front and center."

At Metacritic, the album received an average score of 45 (based on ten reviews) which indicates "mixed or average reviews."

Stephen Thomas Erlewine of AllMusic gave the album a lukewarm review, commenting how the production is "burying her in their thrum."

Writing for The Boston Globe, Sarah Rodman gave the record a mixed review, stating that the "opening handful of songs have a satisfying boom bap and hooks aplenty," but criticized the ballads.

At The Observer, Phil Mongredien had a mixed impression of the material because it contains "forgettable EDM-by-numbers floor-fillers jostling with marginally more inspired ballads."

Melissa Maerz of Entertainment Weekly wrote a scathingly negative review in remarking how Lopez is "working with hitmakers like Max Martin and Chris Brown, they just whip their synth-pop into a weightless foam that would disintegrate if you blew it a kiss" whilst also criticizing the lyricism as "lazy."

At The Guardian, Kitty Empire gave a mixed impression review of the album in pronouncing the only problem is that "There are so many production cooks (and the ubiquitous Pitbull) that the broth is a bit characterless at times."

At Spin, Anupa Mistry's review was mixed, writing how Jennifer issued another rote release deficient in any innovative aspects to make it appealing, which leaves the music feeling "simultaneously calculated and sloppy."

Jim Farber of the New York Daily News was negative, stating that the album "finds J.Lo throwing anything she can at the wall to see what sticks."

At Slant Magazine, Alexa Camp opined that "Unfortunately, A.K.A. also includes a slew of midtempo ballads whose soaring hooks and slick production are wasted on Lopez's reedy voice."

Nick Murray of Rolling Stone noted that Jennifer "sounds lost" on the album.

In a more favorable review, Amaya Mendizabal of Billboard remarked that album contains "hits and misses" whilst it "journeys through some predictable refrains with a handful of prospective triumphs."

Martin Caballero of USA Today called it an "eclectic album," yet suggests that the "results are mixed, with polished production obscuring some uneven songwriting."

"A.K.A. can be treated like one of J. Lo’s rom-coms: You feel guilty for enjoying it but then realize that the soundtrack to her life eventually becomes yours."

At Newsday, Glenn Gamboa grading the album a "B-" commented:

"The quality swings of 'A.K.A' make you wonder if J.Lo knows who she's trying to be." 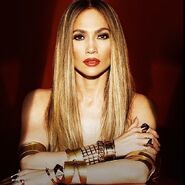 Add a photo to this gallery
Retrieved from "https://jenniferlopez.fandom.com/wiki/AKA?oldid=4535"
Community content is available under CC-BY-SA unless otherwise noted.